Yeah…  That’s what I thought too.  When I first chatted with Cary Walkin over at CaryWalkin.ca.

I recommended Cary’s VBA tutorial BLOG VBA4Play over on my Excel Help – Resources & Tutorials page, because I was blown away by the level of detail that was in the blog.   You know, like step by step on how to create and maneuver through a graphical maze in excel.  You know…  cool stuff. 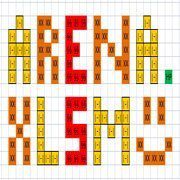 He mentioned that he also had released a game in Excel that kind of started the whole thing.  So I downloaded it and tried it.

Its not Call of Duty, and I am not PewDiePie (SUP’ BRO?).

But if you are a nerd for this stuff like me… then its gotta make you think…  what did I accomplish in the few months that it took Cary to first put this together?

It’s a full RPG that playable within Excel. It features over 2,000 random enemies, 1,000 random items, and eight boss encounters. Arena also has four different endings depending on how players tackle the adventure.

So here is a non-technical view of the game.  Below the video, there are more links on how you download it and navigate Cary’s Arena.Xlsm world.

So the first thing you are probably thinking is…

Dude…  That was kinda cool.  Free right?  Where do I download?

The second thing you were probably thinking was…

For your enjoyment (mostly mine), I have PIMPIFIED a few guys (and ladies) that run some of the more frequented Excel Blogs…

So, did you like this?  Did you download the game?  Give it a whirl?  Make the boss think you were working late when you were actually leveling up doing hand-to-hand combat with a Squirrel ? (pssssst… I know you did)

Loved this? Spread the word

I am the Director of Business Intelligence at a Consulting Firm and am responsible for leading reporting and analytics deployments. I am also a Founder at Excel TV and am dedicated to making this community a home base for Excel users. A place where experts share strategies to Cleanse, Automate and Visualize data.

Teach Me Excel – Webinar of the Excel Landscape

Create Drop Down Box In Excel – “How To” Video Tutorial

How to Create a Drop Down List in Excel