Visualizing.org: Garbage In, Garbage Out

There are a lot of awful visualizations and info graphics floating around the internet. I’ve sent some of the worst I’ve found to my new internet friend, Kaiser Fung, at JunkCharts. His blog hosts a formidable, if unfortunate, collection of chartjunk and he attempts both to make sense of them as well as to provide suggestions on how to make them better.
So where do I find these graphics?  I go to Visualizing.org, a site I am finding harder to respect as time goes on.  That might sound harsh, but if the aim of the site is to “make sense of complex issues,” I think they often miss this point while giving praise and monetary rewards to data designs that, in fact, make issues harder to understand.  To demonstrate this point consider a recent winning visualization, E-CUBE-LIBRIUM, from a team at Columbia University.  According to the team:

By configuring social, economic, and environmental data in terms of a “Rubik’s Cube” analogy, the cube represents a country’s growth with inversely proportional categories placed opposite each other. The 3D extrusions on each cube face is a sustainability indicator, showing volumes where data increases or decreases. From these models, we are able to quickly draw connections and visually identify how each factor affect the equilibrium of the entire system….For example, how do economic gains adversely affect social and environmental health? In each cube, we are searching for stable equilibrium and positive, balanced development that can be sustained over time. Unstable equilibrium may appear to be balanced, but it is not sustainable, due to an irresponsible levels of CO2 emissions, or alarming income and social disparity, for example.

Here’s how the country of Chad is represented in the Rubik’s cube analogy: 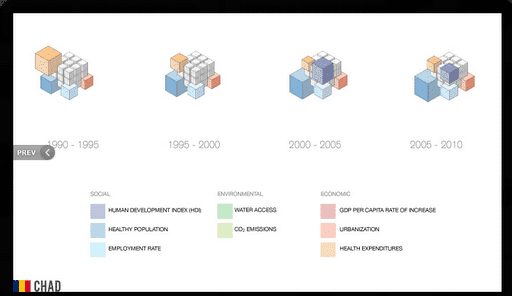 In theory, plotting a country’s relevant indicators should give some visual cues and insights. However, their three-dimensional forms obscure much of this data. There is no scale and no way to tell while looking at each figure if a system is balanced, or even how much gain is too much gain. Moreover, so much is represented that we must keep deferring to the legend to figure out exactly what we’re looking at.
But there are larger problems that seriously undermine the team’s work.  First, this paragraph I excerpted from their write up:

By abstracting data into these virtual objects, they can then be tested for physical properties such as center of gravity, balance point, mass, inertia, aerodynamics, and any number of precise simulation results…The center of gravity of a cube gives us indications as to where a country’s development is distorted and which direction the country needs to move in order to achieve balance. Inertia allows us to test for direction of past and future movement – or lack thereof. Aerodynamics would reveal holes and outliers in a country’s cube, indicative of a crisis or a boom/bust capitalist cycle.

I’m not sure what to say here except…no, these things aren’t possible.  There’s a reason we don’t test a bar chart for its weight in pounds – or how far we can toss a three-dimensional pie chart like a Frisbee.  Graphs are representations of abstract values in made-up space; they don’t have inherent physical properties.
Which brings me to the second major problem.  Because humans are pattern-oriented, ideas that manifest symmetry and balance can be appealing and convenient.  Consider American politics: you might sit on the left, the right, or smack dab in the middle.  It’s an arguably useful simplification; but when you consider where you fall on the political spectrum, is the “ideal” policy truly at the center point?  Put another way, what reason exists to assert that if a country’s indicators aren’t in “balance”, or tending toward some abstract and invented equilibrium, national turmoil will result?  Nothing, of course.
But a steady rise in CO2 emissions sounds like sustainable growth, right?  Maybe, but E-CUBE-LIBRIUM never speaks to this point visually – it’s a point asserted in the team’s write up.  In fact, nothing new is gained by the visual Rubik’s cube.  The actual country indicators by themselves, as numbers, likely do a better job of telling this story, if it exists.
Which brings me to the biggest problem of all: the entire thing is rather heavy-handed.  I believe the designers knew going in which countries they wanted to portray as “unsustainable.” Consider,

Unstable equilibrium may appear to be balanced, but it is not sustainable, due to an irresponsible levels of CO2 emissions, or alarming income and social disparity, for example.

Because there’s nothing in this visualization that indicates system imbalance, or, for that matter, irresponsible CO2 emissions or alarming social disparity, I’m left wondering if these items aren’t just the preconceived notions the designers imposed upon their visualization.  Indeed, the passage appears to argue that their design could give a misleading impression about a country’s stability, that knowledge of a country not presented here (such as social disparity) might mean the appearance of sustainability is incorrect.  Put another way, it doesn’t matter what our visualization says, it can’t be sustainable because we can’t have a country that pollutes at an alarming rate violate our ridiculous analogy. Sounds like confirmation bias to me.
Apparently, Visualizing.org, Columbia University, and the United Nations disagrees with me (and, to some extent, Newtonian Physics). This team’s nonsense won their school $10,000 to continue visualization education.  Hopefully, Columbia will invest in some books on the subject
I’ll leave you with this.
[vimeo http://www.vimeo.com/31704826 w=400&h=230]

Effective means of display in Excel