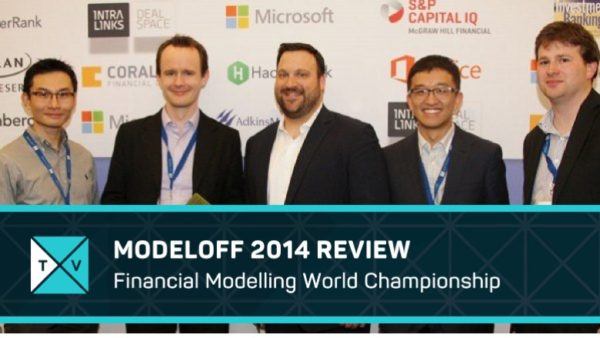 Top Financial Modelers in the WORLD

Once a year, financial modelers around the world fight for the crown.  Here is the scenario.  The first round is on online competition.  Financial modelers from around the world log in from all over the globe at the exact same time and work through a financial modeling challenge/test.  Those that make it to the second round are in for an even more strenuous examination of their abilities.  At the end, 16 finalists are flown to New York to go into a four hour battle at the Microsoft Headquarters.

There was a lot going on.  The ModelOFF organizers went out of their way to make the finalists feel like kings and queens.  This included sessions at the NYSSA, Innovation sessions at Microsoft Headquarters, a helicopter ride around New York City.  And oh yes…  they even went on the subway.

The First Night at NYSSA

The first night was at NYSSA, one of the oldest trading firms.  Several speakers discussed several topics.  It was cool.  But realize that most people in the room had never met before.  They had only seen each others pictures as finalists.  So the big moment was during the breaks, when people had the chance to socialize and meet each other.

Day 2 started with a helicopter ride over New York City.  How cool is that.  Here are some pics of the finalists as they got their “training” before the ride.

Chelsea Market, Subway Ride and on to the Microsoft Building

Then they were off to Chelsea Market and the Microsoft Building for meetings with the Excel Project team.  The Meeting at Microsoft was supposed to go on for maybe 90 minutes but went on for several hours.  Think about this…  in the room with the Excel Product team giving them real time feedback about their product and direction.  Plus Mr Excel was there.  So several of us got some pictures. 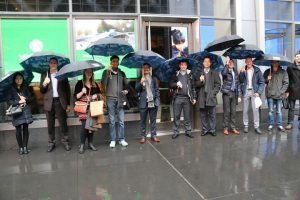 Standing in the rain outside of Microsoft

I took the lead on the formal interviews.  You will see this in the videos below as the five questions we ask like “What is the worst spreadsheet you ever inherited?” Jordan and Oz handled the informal interviews.  There will be more video releases from these as we continue to process the footage.

The finalists (plus some of us stragglers) we’re served a multi-course dinner, complete with beverages and toasts.

On Sunday morning there was a 4+ hour competition.  Analysts against Excel problem.  Challenges galore.  I walked in the room and took some pics, and it was intense. 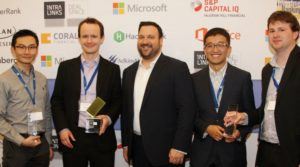 Top notch production by the ModelOFF guys.  The room was packed with friends, family, and people who just follow the competition and are interested.  There were lights, video cameras, and LIVE streams sent out via several channels including Excel.TV.  You can watch the videos below for the entire ceremony, but I want to bring you attention to the winners. 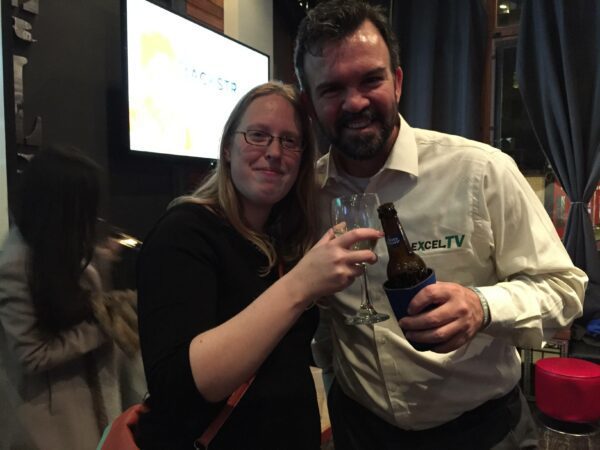 Afterwards we went to a local club where drinks were poured and stories were shared.  Quite the social event.  It was finally over.

Footage from the Event

There will be several more videos produced over the coming weeks as we process the footage.  But here is a starter set.

Find ModelOFF on the internet…

Excel TV was happy to be there.

Oz served as color commentary for a portion of the final awards ceremony. Rick and Jordan did a lot of interviews and everyone treated us like we belonged.  Thank you.

Lots of Cool People were there

This section is nothing more than an obvious ploy to share a few pictures.  We met Mr. Excel and Mr Key Cuts.  How awesome is that? (pretty awesome)

Excel.TV blogged before, during and after the competition.  Here is where you can find them.

First off…  hit one of the links above and go check out ModelOFF.  Next up, share this page and sign up for our Newsletter below.  That way you never miss the chance to see an episode LIVE.